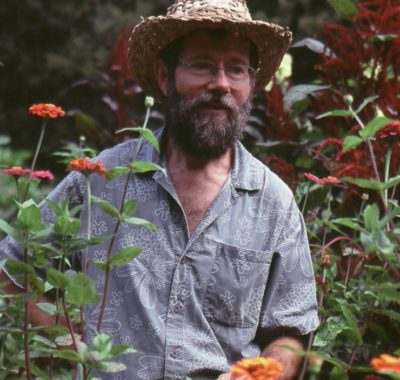 Doug Elliott is an herbalist, naturalist, basket maker and author. He has spent a great deal of time with traditional country folk and indigenous people, learning their stories, folklore and traditional ways of relating to plants.

For many years he made his living gathering and selling herbs. In recent years he has performed and taught from Canada to the Caribbean. He has been a featured storyteller at the National Storytelling Festival in Jonesborough, TN and has conducted workshops and programs at the American Museum of Natural History in New York, the Royal Ontario Museum in Toronto, and the Smithsonian Institution. He has taught regularly at the International Herb Symposium, the Medicines from the Earth Conference, the American Botanical Council and Omega Institute. He has trained rangers for the National Park Service and guided people on wilderness experiences from Down-east Maine to the Florida Everglades. He was named harmonica champion at Fiddler’s Grove Festival in Union Grove, N.C.

In recent years he has received a variety of honors. The International Herb Association presented him with the Otto Richter Award honoring his work with herbs and useful wild plants. The National Storytelling Network (the largest storytelling membership organization in the world) inducted him into their Circle of Excellence for “exceptional commitment and exemplary contribution to the art of storytelling.” The National Association for Interpretation (the professional organization of park rangers, naturalists, museum curators, etc.) gave him the Master Front Line Interpreter Award for his “mastery of interpretive techniques, program development, and design of creative projects” celebrating the human connection to nature and wild plants.

He has authored five books. His first book, WILD ROOTS, An Underground Botany and Forager’s Guide, has been around for forty-some years and is considered an “underground” classic. In 1995 it was given a new cover and re-released by Healing Arts Press.

He has produced a number of award winning recordings of stories and songs, and is occasionally seen on PBS-TV, as well as the History and National Geographic Channels.

Doug will be offering our 2020 Friday Night Keynote Address, and a workshop:

Doug Elliott will be presenting a lively, informative, PowerPoint program celebrating the human connection to the medicinal herbs, including traditional and contemporary plant lore, scientific information, portraits of a number of his traditional herbal teachers and their stories, as well as a song or two, and more than a few belly laughs.

The Florida Herbal Conference offers a weekend for herbal enthusiasts of our southern state to learn from each other, wise teachers, and the plants themselves; to build relationships with herbal sisters and brothers from the region; and to get grounded in their herbal practice through education, fellowship, and community in nature. Learn more.